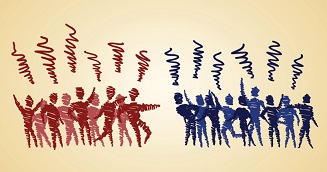 First came the pandemic and now election frenzy. I am not sure which is more unsettling in the U.S. But I have noticed that they are strangely alike.

You need to understand that I am a recovering talk show junkie.  A number of years ago, I would spend almost every driving moment soaking in the “expert” opinions (I referred to them as the real truth” of some of the loudest talk show hosts to whom I could tune in. Armed with all the facts, I was ready to share my views with everyone, whether or not they wanted to hear them. A time like this present “Election Pandemic” would have been fertile ground for me.

After a while, Diane, my wife, noted that I was becoming rather negative and opinionated. Eventually, I came to accept that my personality was changing. So, I changed my listening habits to contemporary Christian music. Though some may consider this an “Oh come on” experience, it really did work. Now I avoid talk radio and to the best of my ability, try to not comment on anything political.

This election pandemic brings to my mind a some examples from the Bible that I cannot ignore, as difficult as they may be. (Yes, really!) The first is from Romans 13:1–Everyone must submit to the governing authorities. For no authority exists except by God, and the authorities that do exist have been established by God. From this I understand that no matter who is elected or whatever guidelines are set by the government, I need to follow them. The only caveat is if those mandates go against what God says in the Bible. So whether pandemic guidelines or even speed limits, I do not really have a choice.

However, there is another example which is a lot more challenging for me to apply in my life. This one has to do with attitude and respect. In the Old Testament  book of 2 Samuel, I read about the attempts of King Saul to kill David, the newly-anointed to be Saul’s successor.

As Saul and his army actively pursued David, there were two occurrences when David could have killed Saul. These were not instances when it was army against army but rather times when David was in a couple of feet from Saul and he could have easily killed the man whose mission was to take his life.

And what was David’s response to these opportunities? His answer was the same I will not stretch out my hand against my master, because he is the Lord’s anointed. He had the chance to save his own life by striking out against Saul. Yet, not because Saul was such a good king; not because Saul conducted himself in a manner that agreed with David; not even because David respected Saul as a person.

Rather, David said he would not stretch out my hand against my master, because he is the Lord’s anointed. He acknowledged Saul as his master and would not do any harm to him because God had placed him as David’s leader.

I know that none of the elected or soon to be elected officials are anointed by God. I also know they will be in office only because God allowed them to be there. But the difficult aspect of David’s example is he showed respect to Saul’s position despite the fact Saul was bent on killing David.

There are many times I forget that when it comes to my thoughts and words about my elected officials. I disagree with what they want to accomplish so I find myself wanting to judge them as a dictator, as ignorant or just as a bad person. And then I find myself wanting to talk and complain to others about that person, not about the policies they are proposing. That is showing disrespect for the position which God filled.

To be completely frank with myself, “John, you need to love that person. You may disagree with him or her, you may see everything they do is wrong, but Jesus still said in John 13, ‘Love one another. Just as I have loved you, so also you are to love one another.’ “

As I read that now I scream inside how difficult that will be. After all, their actions show they don’t care a bit about what I want or believe. But Jesus was ready for that when he said in Luke, “If you love those who love you, what credit is that to you?”

But more than that, I know that when Jesus was suffering on the cross he knew that I would continue with sin in my life. And yet, he did not get down off that cross. He stayed there because I needed that love. My Lord is not asking me to die for these officials, just show respect for the position and love them.

And to do that, I need to always keep my eyes, my mind and my heart focused on what my Savior has done for me. And maybe continue to mute all those commercials.

Thanks for stopping by. I hope you consider coming back. I will wait you.