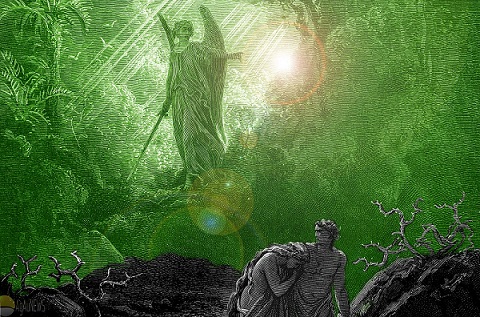 The birth of Jesus should not have been a surprise to anyone of that time. Prophecies foretold his birth. And from now until Christmas Eve, I will share a few of those prophecies. Since they are from the Old Testament, some people may not be too aware of them, but the prophecies lay out the who, what, where and when of this wonderful birth that we celebrate as Christmas.

The Old Testament of the Bible sometimes gets a bad rap, even from some Christians. In no particular order I have heard,” All I read about is fights, killings, laws, unfairness to women and leaders being overthrown.” (As far as I know, none of the Old Testament was written in 2017.)

The first prophecy about Jesus’ birth came on the heels of the fall into sin. Adam and Eve had but one prohibition–do not eat from the tree of the knowledge of good and evil. Eating from that tree broke the perfect relationship between them and God. What was not there before, sin, was now the central force in the lives of Adam and Eve, and in truth, throughout all of creation.

God did not desert the beloved children that he created. Instead he made a vow to Satan. “And I will put enmity between you and the woman, and between your offspring and hers; he will crush your head, and you will strike his heel.” (Genesis 3:15) God told Satan that Jesus, Eve’s offspring, would be born to free the world from the domination of sin. Jesus’ death on the cross crushed the devil’s power.

That was the first promise of the Savior who was to be born on Christmas. Adam and Eve heard the first declaration of Gospel, and faith was produced in their hearts. Their faith looked forward to the coming of Jesus’ birth, their Messiah.

That Genesis prophecy and promise is the same for us today. Through faith in the newborn Savior, we too are free from the penalty of our sins. What a wonderful truth on which to celebrate Christmas!

Come back tomorrow to explore another of the prophecies about the coming Savior. I will wait you.

O love, how deep, how broad, how high; beyond all thought and fantasy,
That God, the Son of God, would take our mortal form for mortals’ sake.
He came his Garden to restore to sinners cast from Eden’s door.
He walked their path; he took their pain, that they eternal life would gain.  CW 371 Thomas a’ Kempis v.1,  J. Aderman v.2.